The idea for this series came about when I decided to enter the Gainesville Fine Arts Association virtual art exhibition "Close-ups". I have done paintings that could be considered close ups but I wanted to make something new. The idea of translating a super close-up cell phone picture into paint came to me when I laid my camera on the kitchen cutting board. The screen showed a graded color field of tiny yellow and green dots. I manipulated and cropped the grainy, out of focus pictures for contrast, saturation and lighting effects to get what I thought was an interesting composition of shapes, texture, and color. 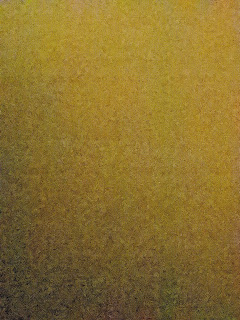 Rather then printing out the photo, I decided to try to translate it into paint.

The challenge was, and still is, to find a way to turn this almost airbrush/ spray paint effect of the soft blending of multiple colors into a painting on the panel without using spray paint.

I have done several paintings with spray cans and could probably get the effect I'm after doing it that way (I still might try that) but I like the more direct approach of applying paint with tools by hand. 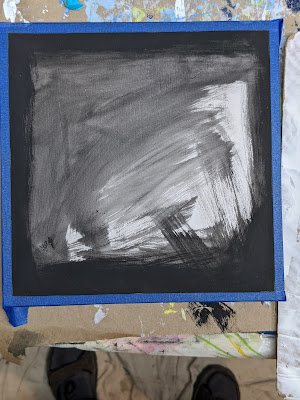 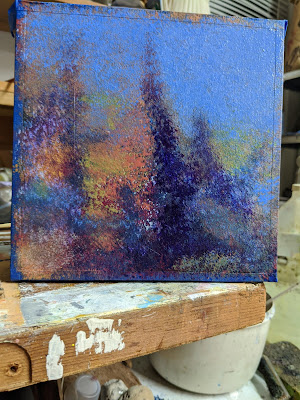 There is something mesmerizing about the repeated dabbing, stabbing, bouncing, drumming technique of applying the paint. I've used that technique many times before probably in almost every painting. But in this series that's the predominant technique.

The tools I used in these three paintings were toothbrush, scrub brush, chip brush, paper towels and paper napkins.

I started by laying down large shapes of color but as the paintings progressed interesting shapes and patterns arrived and evolved. As usual, the painting took on a life of its own and the reference became less important.

I think I will continue this series. With more practice, I will be able to get a blended effect of color similar to an impressionist technique where the individual spots of colors mix in the eye of the beholder .That's the idea anyway.