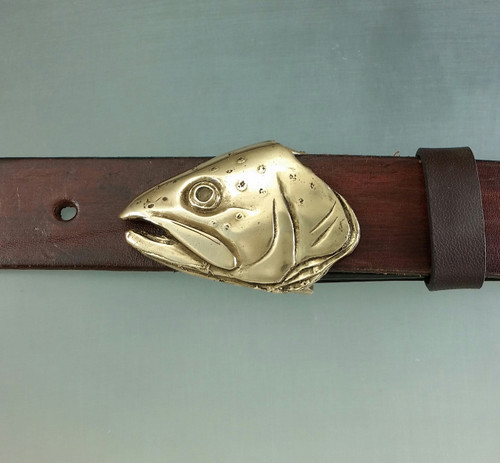 This particular carving was done using a Snake river Cut throat as a model. This is a pretty rare fish but, with out color, all the trout species look pretty much the same. This buckle fits on an 1.25 inch belt

The Rainbow is probably the most common and sought after of them all.  The leaping ability of the rainbow is legendary. A hooked rainbow almost always skyrockets from the water, often a half-dozen times, before coming to the net. Rainbows are less wary than brown trout and more willing to bite. They are a favorite of fly fishermen, but can also be caught on spinners, spoons, plugs, and a wide variety of baits ranging from worms to small marshmallows.

Steelhead and Rainbow Trout are the same species of fish. The difference between the two is that the rainbow trout remains in fresh water, while the steelhead is anadromous - living in both fresh water and the ocean for parts of their lives. Steelhead trout were recently reclassified as part of the salmon genus Oncorhynchus. Like other salmon, Steelhead return to their birthplace to spawn. Unlike other salmon, Steelhead do not die after spawning. from alaskasalmon.com